(Just An Old Sweet(?) Song Keeps) Georgia On My Mind: Southern Gothic Ballads & A Trip To The Deep South 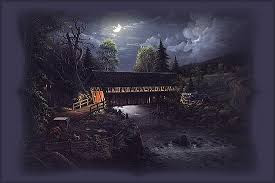 There is a mystique about America’s deep south as compelling as it is repellent. Southern hospitality is legend, yet the southern States do not seem like somewhere that would necessarily welcome outsiders beyond the superficial surface of sweet tea, fried chicken, and “Well, bless your heart”. Any of the South’s deeper (muddy) waters (off the Tallahatchie Bridge)—the waters of its deep-veined history, its turbulent pride, and its impassioned reactions, seem as if they are guarded like the secrets in an old, long-standing family—where relatives despise each other, but distrust a stranger even more. Where the entire clan seethes with the resentment of being unfairly judged and wholly misunderstood by the masses.


Or at least that’s the way I imagine it.


In a couple days I’m headed to Georgia, but prior to that the only time I’ve spent in the American South is when we took a trip to Orlando—and theme parks alive with manufactured magic are thrilling, yet hardly a good representation of the South I’ve read about in literature, seen on film, and, mostly, gleaned impressions of by listening to the dark, Southern gothic ballads I grew up hearing on the radio, tiny ears pricking and peeling through the static, greedily drinking in The Ode To Billy-Joe, The Night The Lights Went Out In Georgia, and then later, in my teen years, Alan Jackson’s Midnight in Montgomery, a track that still makes me want to flick all the lights on and slip on a sweater to answer the uneasy chill on my arms.


Ballads—which are both story and song—somehow also imprint themselves on the brain like tiny movies. Perhaps it’s the accompanying music that helps cast such vivid pictures. Consider, for example, the hum of the cello in The Ode To Billy-Joe, lending such a foreboding undercurrent.  Then an entirely different tenor in Midnight in Montgomery, where the violin whines in a way just as mournful as the song.


Lyrics too paint the pictures of these short, haunting stories, and this more than anything makes the writer in me want to sweep my hat off and bow down low to the song writers. For not only were these folks imprisoned by the rhymes that would ultimately give their ballads rhythm (thus limiting, vastly, the words they had to select from), they were also charged to use the most powerful actions and images possible in order to draw the most vivid story. Yet look at the result. Bobby Gentry lets us feel the sultry Mississippi heat on Choctaw Ridge, smell the lunch Mama’s been cookin’ all mornin’—now pass the biscuits, please. Seriously: have any of you ever heard The Ode To Billy-Joe, or The Night The Lights Went Out In Georgia, and not had a little movie playing in your head?


I didn’t think so. I for one could see those small, bloody footprints at Andy’s house every time I heard The Night The Lights Went Out In Georgia. I am pleased to say I still do.


But back to mood and atmosphere and the secrets these Southern Gothic Ballads imply linger within that muggy geography, secrets as oppressive as the choking heat and ones that seam the very edges of the land together—from its swamps to its moss-laden oaks—stitching them tightly away from prying eyes. There is more than just mystery in these ballads, there’s menace. Billy-Joe’s suicide, Hank Williams’ drunken recklessness, Little Sister’s confession to (and seeming pride in) double murder (Andy and her sister-in-law; one body, she boasts, that’ll never be found)…these are heavy hitting incidents. So very much at odds with the gospel-singing, God-fearing, respect-your-elders with a yes ma’am or no ma’am portrait of the South we’ve been fed to accept as the cultural norms of the region.


Yet…it is also this very incongruence that makes these ballads’ lyrics stay with us decades after they drop from the Top Forty, and also what lends to the South seeming to be somewhere mysterious, a place where passion, pride, and peril are all insidiously woven together to create disquieting sorts of questions like the ones that lurk between the lines of lyrics, questions that haunt our ears late at night when the room falls dark and our eyes drift shut and we wonder….


Why did Little Sister kill Andy and her brother’s wife? Was she avenging his honor? If so then why didn’t she speak up instead of letting him hang?  Was she in love with Andy herself? But how could that be when she—near sneeringly—says he didn’t have many friends, implying that he didn’t deserve any, either? Will she take her dark secret to the grave?


Why did Billy Joe jump off the Tallahatchie Bridge? What had he and our narrator tossed off the bridge before his suicide? What does she know that she is not saying? She hadn’t been aware he was suicidal, that much is clear in her shocked immobility at the lunch table, and yet…she knows something. What is it?


So many secrets. So many questions. Such a tempestuous area filled with such an enigmatic culture and impassioned, prideful people. I am in thrall with this place that yes, hold its secrets, yet also seems to be somewhere that allows for the romanticizing of all the melodrama—both real and imagined—within its borders.


I feel lucky to be headed to the deep south of the USA, and to be able to add Atlanta to the list of fascinating cities I’ve visited. I think I’ll load my iPod with a few appropriate tracks for the trip, lyrics that curate the area and advise me to:


“….just hear that whippoorwill
See the stars light up the purple sky,


Feel that lonesome chill
'Cause when the wind is right, you'll hear the songs, smell whiskey in the air
Midnight in Montgomery, they’re always singing there…”

Jazz & Roar, Windsong On My Mind

Find Divinity & The Python on Goodreads